Cockroaches are one of the most common pests found right across the world. As a group, cockroaches exploit a diverse range of ecologies, living amongst decaying leaf litter, under bark, in burrows, on the foliage of shrubs and the nests of other pests and insects.

While there are approximately 3500 species of cockroaches worldwide there are only about 10 species that have seriously exploited the dwellings of humans.

Cockroaches vary in size from medium to large and when you look at them from above, they are oval in shape. They have antennae and their legs make them fast runners and difficult to catch.

Their heads are shielded beneath the pronotum and they have well-compounded eyes and chewing mouthparts. Most species have wings but not all are well developed.

They have a large abdomen which carries a pair of unusually prominent cerci.

Infestations of cockroaches develop in and around buildings and structures that provide food, shelter and often the preferred conditions of temperature and humidity.

A commercial kitchen may support hundreds or even thousands of cockroaches at various stages of their development. Cockroaches are carried from place to place as live individuals or as egg cases, in food, food packaging, luggage and furniture.

Being mostly nocturnal creatures that hide in the day resting in tight cracks and crevices and they become active soon after the onset of darkness when they emerge to seek water and food.

Occupants of infested homes or businesses are often unaware of the extent of cockroach activity that commences after dark. Active cockroaches observed during daylight hours often indicates overpopulation.

Where a large cockroach infestation exists, an unpleasant odour often develops which is caused by the secretions from the mouth and cuticles of the cockroaches.

Cockroaches are considered very effective scavengers eating virtually anything from human or animal food to dead animals and faeces.

The health threat posed by cockroaches is considered serious as they are known to carry on their cuticles and in their gut and faeces, disease organisms that affect us humans.  Each cockroach may typically carry several million disease types or pathogenic bacteria on and inside its body. These include Salmonella which causes food poisoning in humans and animals.

Other organisms that cause gastroenteritis and hepatitis can also be found in cockroaches. They are known to contaminate food products, utensils and our homes and businesses with their droppings, cast skins, empty egg cases, dead cockroaches and vomit marks on surfaces. 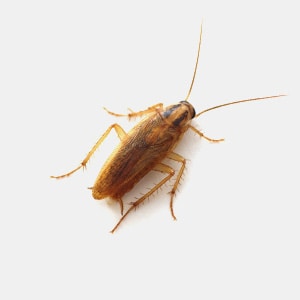 The relatively small German Cockroach is the most widespread and successful cockroach that coexists with humans in buildings. This cockroach seeks conditions that provide warmth, moisture and food. The vast majority of infestations are associated with kitchens or other food handling areas both domestic and commercial. This cockroach can be found under sinks and cupboards, in and under drawers, in and around water heaters and appliances such as refrigerators, stoves and in wall voids. They breed rapidly, taking as little as 40 days to develop from hatching to adulthood.

Egg cases are usually carried by the female until just before hatching and each egg case contains approximately 30-40 eggs. 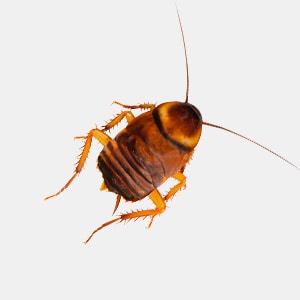 The Brown Banded Cockroach is relatively small, pale brown in colour with pale bands across their thorax and abdomen. This cockroach loves to be indoors, frequently infesting the dwelling parts of houses, offices and restaurants. Unlike the German Cockroach which is found mainly in kitchens, this cockroach can be found scattered throughout wardrobes, cabinets, behind bookshelves and wallpaper. This cockroach prefers warmer temperatures and will, in fact, fly if disturbed. Egg cases which contain up to 18 eggs are often found glued to surfaces and hatched nymphs take between 2-4 months to develop into adults. 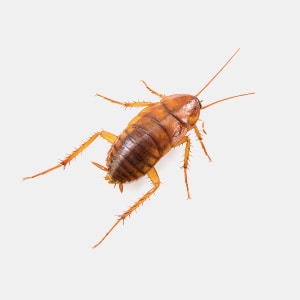 This medium sized cockroach is dark brown to black in colour. Because they prefer cooler moist conditions, they are usually found under leaf litter, in damp subfloors and in and around drainage systems. Their diet is mainly derived from decaying organic matter although they are also known to attack wallpaper and books. Oriental Cockroaches are also known to breed rapidly with each egg sac containing up to 16 eggs. 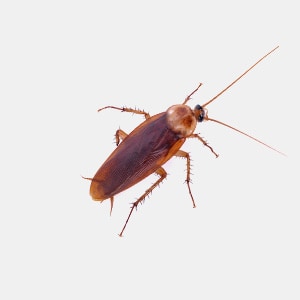 The Australian Cockroach is also considered large. In appearance, this cockroach is very dark brown and has yellow markings on the pronotum & forewings. Because this cockroach prefers to eat plants, you will often find them in greenhouses and under bark and leaves in gardens. In houses, they inhabit the subfloor voids, wall voids and roof voids. Their egg cases contain up to 24 eggs and once hatched it takes between 6-12 months for Nymphal development. 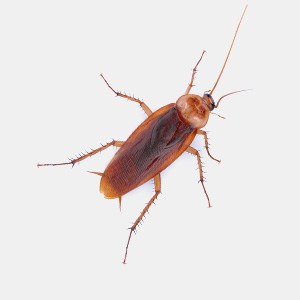 The American Cockroach is considered the largest cockroach that infests dwellings. It is reddish-brown in colour with a pale yellow border around the pronotum. This cockroach prefers warm, moist and dark conditions and tends to live indoors in colder regions but mainly outdoors in warmer regions. This widespread pest can be found in wall, roof and subfloor voids and in around sewers and drains. With a preference for consuming decaying matter, this cockroach will still eat human food, paper and clothing. Egg cases are usually dropped or glued to surface and can contain up to 16 eggs. 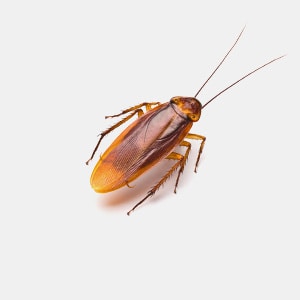 The Smokey Brown Cockroach is also considered relatively large and adults are dark brown to almost black with no pale markings. The habits of a Smokey Brown Cockroach are in some ways similar to those of the American Cockroach often found in garages, drains, subfloor areas and roof voids. This cockroach does prefer food materials of plant origin so is often a pest in gardens, nurseries and greenhouses. Egg cases dropped or attached to surfaces by the female may contain 26 eggs and once hatched, will take 6-12 months for nymphal development.

Cockroaches Threatening Your Business? We’ll Get Rid Of Them.