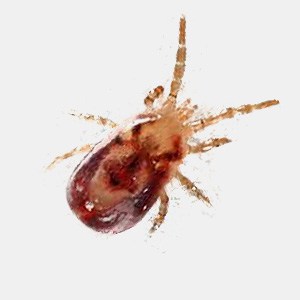 Bird Mites which are also commonly referred to as lice are tiny oval-shaped parasites barely visible to the naked eye.

They measure only 0.1-2.0mm in length and have a sparse covering of short hairs. They are almost transparent until they ingest blood then they appear to be reddish-brown in colour.

Bird lice have a short lifecycle of approximately 7 days but have the ability to rapidly generate large populations as once their eggs are laid on the host or in the nest they hatch within three days.

Birds such as pigeons, Myna birds and starlings are notorious carriers of Bird Mites. These Mites feed on the blood of these birds. The infestation of bird mites begins as the birds begin to build their nests. These bird mites then feed on the blood of the unfeathered baby birds and adults. After the babies have left the nest, the bird mites are left without a host or food. The mites are then forced to search for a new host and food and often these happen to be humans within that building.

When a bird mite bites, it injects its saliva, at the same time leading to a severe irritation causing rashes, inflammation and intense itching. Often the intense itching leads to an even more serious secondary infection.

Have Pigeons and Myna Birds Carrying These Nasty Little Parasites? We Can Help.