Wasps play an important role in our ecosystem helping to pollinate flowers and also controlling insects.

According to the Australian Museum, there are over 10,000 wasp species throughout Australia all of which have a similar appearance – They are a large insect with a slender narrow waist with different colourings.

Towards the end of the wasp’s abdomen, they have a “Stinger” which they use to paralyse or kill their prey. This same stinger is also what they use to sting us, humans, when they feel threatened or are defending their nests. This is why wasps must be treated with caution as some wasps are extremely aggressive and will attack delivering single or multiple painful stings which if you suffer allergies or have been stung multiple times will require medical assistance immediately.

If you find a wasp nest it is highly recommended to contact a professional to remove the nest for you as wasps can be very dangerous to handle. Our Technicians are trained on how to safely remove wasp nests from your home or business. 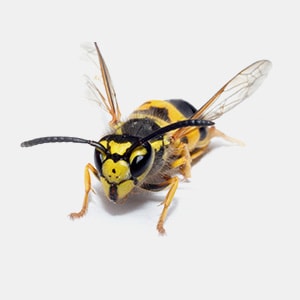 The Paper Wasp has a slender body with a narrow waist. It is about 10 –15mm in length and has a small head. It has two pairs of long, thin, brown wings. The first pair is slightly larger. The abdomen of the Paper Wasp is black with yellow and orange bands. Yellow markings may also be seen on the face of the paper wasp. Their nests are small made out of chewed leaves which they turn into paper pulp. They formulate multiple hexagon-shaped cells inside the nest which is hung by a stalk. Each nest can contain up to 200 baby wasps. Their nests are typically found under eaves of houses and amongst trees and shrubs. This wasp is not considered aggressive only stinging when protecting its nest. Paper Wasps prefer a diet of protein such as meat and are present all year round. 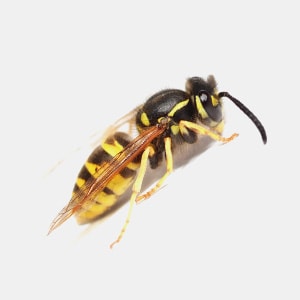 The female is slightly smaller than the male, measuring 12-15mm in length compared to his 20mm. It has yellow bands on a black body. European Wasps are fast fliers, flying with their legs held close to their bodies. They have clear wings that fold over their bodies. Their nests are built out of chewed wood pulp and saliva giving the nests walls a very distinctive papery look. Their nests which are large can contain up to 100,000 baby wasps. Their nests are commonly found underground, amongst tree stumps and rockeries and also in roof voids and wall cavities. European Wasps prefer a diet of protein such as meat but also highly attracted to sweet sugar foods. These wasps are present all year round especially in the warmer states although in the cooler months their activity reduces. The European Wasp is a very aggressive wasp especially when disturbed, capable of delivering multiple stings at once. 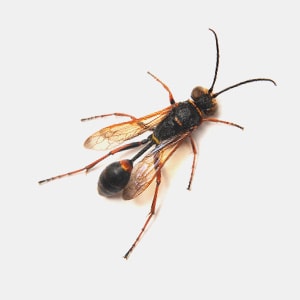 The Mud-Dauber Wasp is quite large in size measuring 25-30mm with a thin waist and long, slender legs. Its body is covered in black and yellow rings and their wings can be transparent to dark brown in colour. They build their nests as their name suggests out of mud, forming multiple hexagon shaped cells. They store their prey such as spiders in each cell before laying their egg and then sealing the cell. Once the egg has hatched they have a meal to feed on. Their nests are commonly found attached to walls and ceilings. The Mud-Dauber Wasp enjoys feeding on nectar from plants and are more active in Spring and Summer.