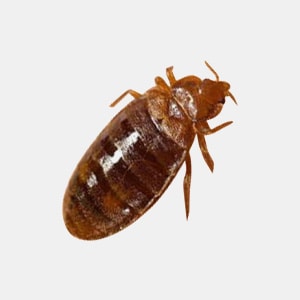 Bedbugs are a major problem right across the world frequently found in residential homes, hotels, taverns, inns, hostels and even transport such as trains and planes.

Humans transport bedbugs with them in their clothes, luggage, bedding and furniture whilst travelling from one place to another.

Adult bed bugs are usually 4-5mm long, rusty red-brown in colour, wingless and oval in shape. Their bodies are considered to be flattened but can expand after a blood meal.

They have piercing and sucking mouthparts which are normally present as a proboscis that is tucked along the central part of the head and thorax. When feeding this proboscis is swung forward and downwards which impales the skin of us humans.

The adult female in her lifetime anywhere from 45 days to over 1 year can lay between 200-500 eggs. Eggs usually take approximately 7-30 days to hatch into nymphs. Nymphs are generally 1-4mm long and are much paler in colour. Bedbug nymphs undergo 5 moults before reaching adulthood and require at least one blood meal in between each moult. The adult bedbug can survive several months without a blood meal.

Although the bedbug does not associate itself with any serious disease transmission, the bites of bedbugs can be very irritating.

They are nocturnal spending their daylight hours hiding in crack and crevices in close proximity to the bed.

The higher the temperature of the host allows for easy detection in locating a blood meal. Although humans are considered their favoured host, bats, cats and other animals may also provide a blood meal.

When the bedbug bites its victim, saliva with anticoagulant properties is injected. For some people, there is no reaction or irritation or pain felt, but for some people that do have a reaction, they produce local swelling at the site of where they have been bitten followed by mild to severe itching and irritation. Due to this severe irritation and constant scratching, this can lead to secondary infections.

The activity of bedbugs is usually identified by irritating bites left behind after the bed bug has taken a blood meal from you. Although blood spots on the bed sheets or mattress is also another indication of bed bug activity. An essential first step in the control of bedbugs is to determine the extent of the infestation by hiring a professional to conduct a thorough inspection of the building.

Are Bed Bugs Threatening Your Business? We Can Help.